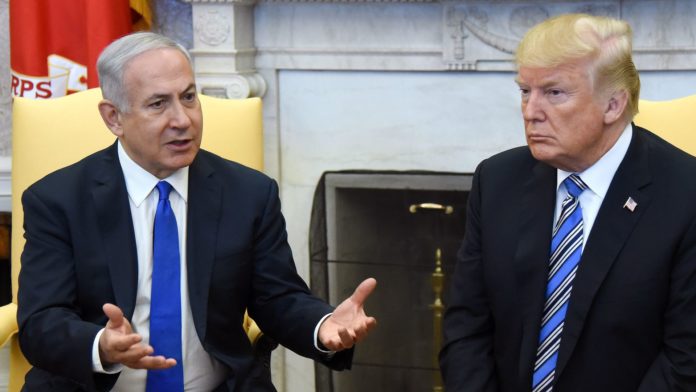 As Hamas rockets rained down on Israel in response to the IDF’s targeted killing of Palestinian Islamic Jihad (PIJ) Leader Bahaa Abu Al-Ata at his home in the Gaza Strip, President Donald Trump in America quietly signed an agreement that will immediately deliver into Benjamin Netanyahu’s coffers an additional 2.5 billion dollars. The disbursement, which Trump called a “matter of international security”, augments the 3 billion dollars per year in financial aid that Israel has received from the United States since 1976. It is the largest recipient of American generosity; all taxpayer money.

According to sources familiar with Trump’s princely kindness, the president yesterday got 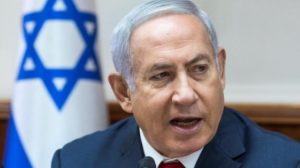 an “emergency” telephone call from Netanyahu, who said Israel needed an immediate cash infusion to bolster Israel’s defenses and dent Hamas’s ability to launch future strikes on his nation. He argued that Israel’s Iron Dome Defense System, which allegedly intercepted 80% of yesterday’s incoming strikes, does not guarantee survivability against enemies—foreign nations and terrorist cells—that have made Israel’s destruction their paramount goal. Israel needed boots on the ground to infiltrate its enemies’ strongholds, Netanyahu added.

After the call, Trump spoke to VP Pence.

“Mr. President, protecting Israel is our obligation. We must give them what they ask for. If Israel falls, so too will the United States,” Pence purportedly told him.

“After that, President Trump retreated to the Oval Office and clandestinely signed a funding

agreement to give Netanyahu the two-and-a-half billion bucks he asked for, no questions asked. There was, nor will there be, public record of the grant. They will cook the books to hide it from public scrutiny. There are plenty of powerful people unhappy with his cozy relationship with Israel,” our source said.

It is unclear why Israel needs gargantuan amounts of foreign cash. Besides the 3 billion annual gift, it benefits from 8 billion dollars in guaranteed United States loans. In 2018, the U.S. dished out 43 billion in foreign aid; the top three recipients were Afghanistan ($4.89 billion), Iraq ($3.36 billion), and, of course, Israel ($3.18 billion). Conversely, the ever-parsimonious Israel constantly claims it is broke and has not given a dime in foreign aid since 1976, when then-Prime minister Yitzhak Rabin stingily gave France $235,000 toward funding student exchange programs, and then only because his daughter Dalia wanted to study in Paris.

In the book In the Eye of the Dragon, Israeli studies author August Tischendorf wrote “At 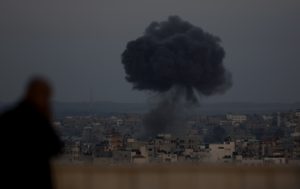 some point there was a role-reversal. Zionist controlled Israel took charge of the United States and its finances. The United States became a puppet to Israel and its leaders, and with each successive United States president, Israel, which falsely claims to be attacked on all fronts, grew in power and wealth. It has amassed a fortune greater even than that of the Vatican, and never reciprocates to its benefactors, including its greatest ally, the American presidents.”

His assertion holds weight, as even Donald Trump, who campaigned on Nationalism and promised to reduce foreign military aid and to stop fighting other nations’ wars, is doling out cash like a rigged slot machine. Moreover, in December the president drew biting criticism from Republicans and Democrats alike for formally recognizing Jerusalem as the capital of Israel and ordering the relocation of the American Embassy from Tel Aviv to the hotly contested Holy City. Lawmakers said Trump overstepped his jurisdictional authority.

His recent 2.5-billion-dollar gift to Israel is just another punch in the gut to American

In closing, the author of this article has serious concerns with the government’s unrepentant financing of Israel (and other nations), especially because our own courageous soldiers fighting the establishment’s dirty wars abroad still lack basic essentials, such as body armor, to protect themselves against many enemies our own government has helped finance.

Im sorry, but what happened to “Make Ame-REEK-a Great Again”?!….HA! Hes all but PROVEN hes a Zio-Stooge/KhazarianMafia-(Jared K-M-ushner )-BOOT LICKER-Not too mention a career Kriminal, LIAR & BOZO of the “Bigliest” 1st order….. Just remember who Back2TheFutures character “Biff Tannen” is patterned after & inspired by…;) TRUST ME-I KNOW these clowns….~ALL TOO WELL unfortunately… I have to deal with D.J.T/J.K/Trump fam et al/H.R.C & Ivanka Trump DAILY via V2K-(Voice To Skull/Frey Microwave Hearing Effect/Synthetic Telepathy EVERY day since April of 2015 up to present day as Ivanka self identified herself in that month via such tech. Ive probably been dealing… Read more »

Are the Anunnaki and Israel allied?