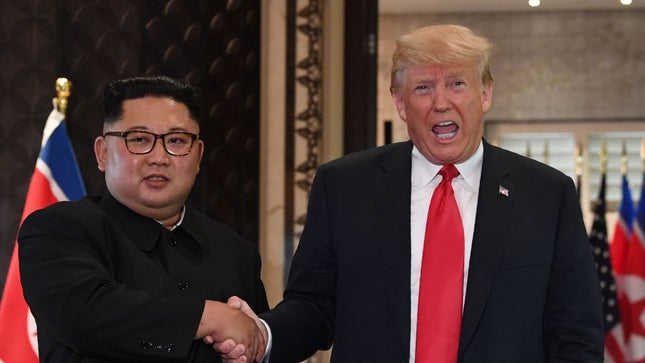 President Trump on Friday received a cryptic message from his sometimes friend, sometimes foe Kim Jong-un, who wrote he will deliver upon the United States a “Christmas Surprise unlike you have ever received” unless Trump agreed to immediately ease economic sanctions placed on North Korea.

Unlike innumerable past threats, the White House is taking Jong-un’s latest provocation 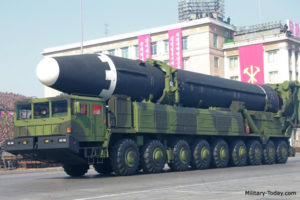 quite seriously, because Trump classified the document and asked a three-star general at the Defense Intelligence Agency (DIA) to determine its veracity. He told Trump the “Christmas Surprise” referred not to gifts but to Jong-un’s imbecilic desire to cement himself as a serious contender on the world stage and someone not to be trifled with. The same general criticized Trump’s recent visit to North Korea; he said Trump’s tendency to praise the dictator emboldened rather than curtailed Jong-un’s immutable quest for power.

In describing his relationship with Jong-un, Trump said last October, “…we fell in love. No 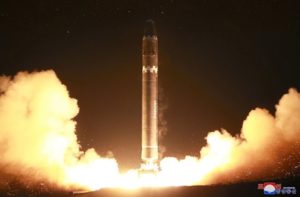 really. He wrote me beautiful letters. They were great letters. And then we fell in love,” a sharp contrast to comments made a year earlier when he called Jong-un “rocketman” and “a madman with nuclear weapons” during a telephone conversation with Philippines President Rodrigo Duterte. Although Trump’s recent, more affable language might be a perfidious ploy to gain Jong-un’s trust, an October DIA assessment concluded that Jong-un is now more likely than ever to militarily challenge the United States, and the three-star general, whose name cannot be revealed per Pentagon ground rules, told Trump Pyongyang now possesses critically needed components for three independent weapon platforms that could be used against the United States or its allies.

In the days of yesteryear, nuclear bombs lacked precision accuracy; they could haphazardly 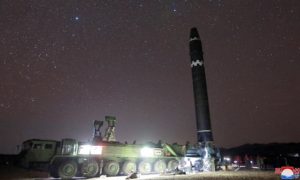 target cities but lacked the ability to pinpoint strategic targets like a military base or a missile silo. In the 1960s, the introduction of advanced telemetry and ballistic flight controls solved this issue for the United States and Russia, while the U.K., France, and China lagged behind. Until recently, North Korea, which conducted its first nuclear test in 2006, had only rudimentary telemetry modules, and tests involving the nation’s principal medium range ballistic missile, the No Dong | 1, failed miserably: The missiles either exploded on launch platforms or fizzled out shortly after liftoff.

Today, however, the DIA believes Jong-un has three operational HAWSONG-15 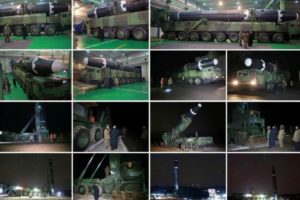 intercontinental ballistic missiles and enough enriched plutonium to fit each with a 475-kiloton nuclear warhead; powerful enough to level a town or utterly obliterate a strategic target. Moreover, the DIA assessment indicates that Jong-un has obtained telemetry modules on par with those used by major nuclear powers. The agency told Trump a dissident Chinese aeronautical engineer, Bao Shuang, smuggled schematics through a now-sealed subterranean tunnel that stretched from Anshan, China to Sinuiju, North Korea. His motives for defecting remain unclear, as Jong-un ordered his execution—by 30mm anti-aircraft fire—shortly after his own scientists at the Yongbyon Nuclear Scientific Research Center validated the blueprints and built their own functional version of the telemetry device. Beijing was aware of the defection, but ignored its ally’s subterfuge due to the Sino-North Korean Mutual Aid and Cooperation Friendship Treaty and a shared hatred of the United States. 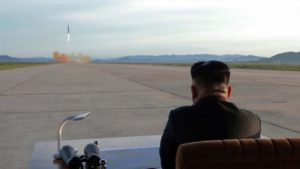 that the dictator does not believe the U.S. will launch a retaliatory strike against a single ICBM aimed at Pearl Harbor or Seoul.

“In Kim Jong-un’s warped mind, he thinks Trump will respect him for flexing his nuclear muscles. He doesn’t think Trump or other nuclear-capable countries will risk incinerating the Korean Peninsula or plunging the planet into World War 3. He thinks the only way to get respect is to nuke somebody, and his so-called Christmas Surprise may be that—a sudden strike,” said a DIA analyst under promise of anonymity.

But Jong-Un need not nuke a nation to plunge the world into chaos. He has an alternate 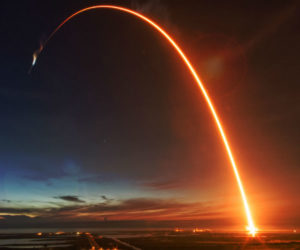 weapon at his disposal: A nuclear electromagnetic pulse device (NEMP.) Even a low-yield airburst far above the earth’s surface would release a blast of gamma rays into the mid-stratosphere over a wide area. The resulting explosion ionizes the surrounding air, creating a secondary EMP as the atoms of air first lose their electrons and then regain them. The resulting rapidly changing electric fields and magnetic fields may couple with electrical/electronic systems to produce damaging current and voltage surges. An airburst over the mid-pacific would cripple Hawaii and potentially parts of the western United States. It would fry everything from outmoded transistor radios to the latest microprocessor-controlled automobiles. Aircraft caught in the blast would literally plummet from the sky.

The DIA believes Jong-un would select this method of attack over nuking a city, for it would 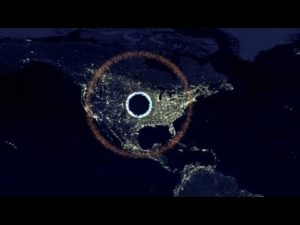 align with his sumptuous desire to manufacture fear and pandemonium. Also, the DIA opined that Jong-un thinks the west will be less inclined to retaliate with nuclear weapons in response to an EMP attack than it would a nuclear strike directed at foreign soil.

“Jong-un sees war as a game. And believes the more aggressive he is, the more points he will gain. The rhetoric in his inner circle ratcheted up a few days before he sent Trump the Christmas Surprise message. Of course, it could all be just another Jong-un bluff, but an EMP strike would not make for a merry Christmas for millions of people,” a DIA source said.

Even without irradiating the planet or turning Hawaii into a pre-industrial civilization, Jong- 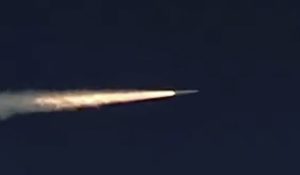 un has a third practical weapon that raised alarm bells at the Defense Intelligence Agency Headquarters in Washington, D.C. He acquired from China anti-satellite (ASAT) weapons that could be launched against civilian and military satellites that the nation relies upon for communication.

In 2018, Pyongyang was given unrestricted technical access to China’s SC-19 ASAT, a non-explosive, kinetic kill vehicle that strikes its target at speeds of five miles per second at altitudes up to 500 miles above the Earth. For three weeks, scientists from China’s State Administration for Science, Technology and Industry for National Defense coached their North Korean counterparts in the finer points of Kinetic weapon technology. An April 2019 DIA report unequivocally stated North Korea put the information to “bad” use and manufactured at least six anti-satellite kinetic weapons.

The destruction of a single U.S. military satellite would pose only a mild inconvenience; the 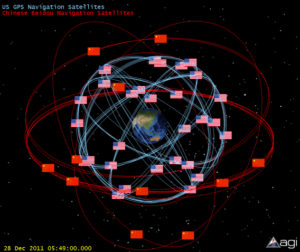 U.S. practices redundancy. But the destruction of four, five, or six would cripple the military’s communication network both at home and abroad. Besides wanton destruction of military hardware, ASATs can create a different but equally dangerous threat—space debris. In 2007, Beijing tested a SC-19 on a defunct Fengyun-1C weather satellite. The missile flew into space and struck the satellite at an altitude of 530 miles. In the void of space there was no sound from the impact. The satellite was destroyed instantly and in the ensuing hours its destruction spread tens of thousands of high-speed metal debris that formed a ring around the Earth that will threaten manned and unmanned spaceflight for decades to come. In response, the United States had to expend valuable and expensive fuel to distance its satellites from the field of shrapnel.

“Kim Jong-un is fascinated by satellites but also angry he has so few of his own. Since he 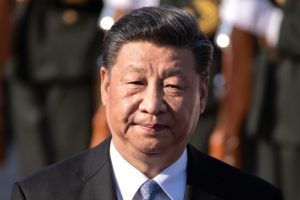 doesn’t have many, he doesn’t want the west to have them either, a mindset that’s made him invest lots of money in anti-satellite research. He has the ability and the will to use such technology. It’s only a matter of when,” a DIA source said.

In response to Trump’s inquiry, the DIA projected in a still-classified memorandum a 34% chance—with a 15% margin of error in either direction—of Jong-un making good on his promise. His renewed missile tests in the Sea of Japan, coupled with the execution of a half-dozen moderates in the Supreme People’s Assembly that favored U.S. appeasement, suggest the dictator has abandoned hopes of reconciliation and is once again heeding the advice of hardliners. These elements have long pressed for war with the United States, both under Kim Jong-un and his father, Kim Jong-il. 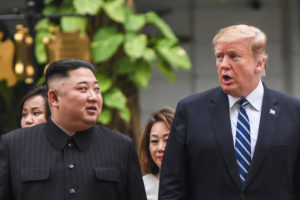 raising the nation’s National Terror Advisory level to “elevated” from Thanksgiving to New Year’s Day. It is unknown whether the president will act on the information. The agency also said Trump should declare the military equivalent of “DEFCON 2” if U.S. surveillance satellites detect any unusual and conspicuous movement of North Korea’s mobile launch platforms, a sign that the rogue nation might be preparing its missiles for flight.

What happened to the title “Emperor Kim”? Really thought it was a great idea!

Folks be on the prepared side next month. Have food, candles, oil lamps, camp stoves and fuel. Have warm winter clothes, and plenty of warm bedding. If an EMP event occurs these things could save your life. Have alternate transportation like an older than 1990’s vehicles, even bicycles. If you can find a place you can get to, out of any large town, or city, be able to get there under winter conditions, even if you must walk. Cities will become hellholes within two days after the power goes out. Be prepared to protect yourself and your family. Studies done… Read more »

He is trying to get to nibiru