The Russian government on Tuesday took a bold step in its war against the Anunnaki, launching precision airstrikes on an Anunnaki fortress in northern Syria. Within hours of the bombing, anti-Putin activists and enraged Russophobes claimed the bombs struck, among other targets, a maternity ward for impoverished pregnant widows.

Federal Service Bureau (FSB) agent Dimitri Osmosovich, however, said no humans were in 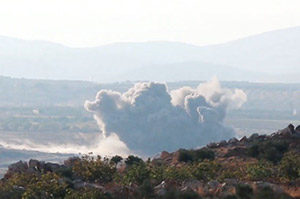 the building when the bombs fell and that the structure’s occupants had abandoned the ward six months ago after two nurses and a pediatrician reported having seen “abnormally tall humanoids with shimmering skin and razor-sharp teeth” lurking near the building. In September, Vladimir Putin received credible intelligence that the Anunnaki had seized the ward and were using it to store the vacuum-desiccated remains of war victims for future consumption. He spent a month planning the attack, while the Ministry of Defense (MoD) fitted Su-34 Fighter/Bombers with a recently approved classified ordnance it felt would annihilate the Anunnaki hive. 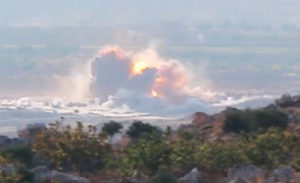 collateral damage, but the impalpable fog of war seldom spares the innocent. Boots on the ground swept the streets for pedestrians; one Spetznas team escorted civilians away from the combat zone; another laser-designated the target for the ensuing airstrike. The bombs unerringly struck their mark and obliterated an Anunnaki coven that had been terrorizing the region for months, Osmosovich said.

“We can safely say that with the destruction of the building many Anunnaki were presumably killed. This is another victory for the Russian Federation in the war on these rapacious invaders. We don’t exclude the chance of a few civilian fatalities, but battle damage assessment found no human corpses other than those the creatures kept for meals in the building. Gauging Anunnaki casualties is most difficult because an organ behind the creatures’ hearts secrets acid that liquifies them at time of death. And, yes, they do often escape through portals. But we believe the weapon used prevented that in this case,” Osmosovich said.

In addition to the ward, the jets bombed three other buildings—a vacant apartment 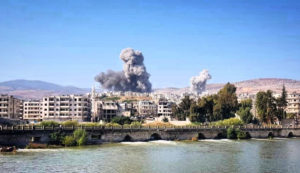 complex, a bakery, and an unidentified structure—suspected of housing Anunnaki insurgents. He would not elaborate on what proof substantiated the attack on the three buildings, but said Putin cleared the assault with Bashar al-Assad in advance of the strike.

“We operate with authority granted by the rightful Syrian government,” Osmosovich said.

In closing, images surfaced on the internet Wednesday morning of first responders removing human victims near the blast zone. Osmosovich insists the photographs actually depict Israeli-backed crisis actors working on behalf of the Mossad to simultaneously undermine Putin’s war on the malevolent aliens and to generate support in favor of ousting all Russian assets from the besieged nation.

I am assuming that the US Space force is eventually going to get involved in this mess.

Is this why Syria was illegally invaded by the US? Most reasonably educated people know of the Annunaki. What if Putin ever joined forces with these aliens? We’d be fucked!