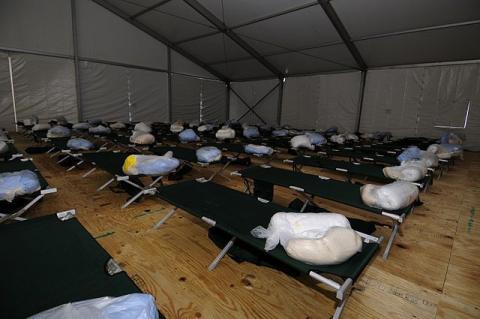 The Federal Emergency Management Agency (FEMA) will conduct a mass casualty drill that involves triaging persons infected by an imaginary pathogen and suppressing civil insurrection among a panicked citizenry, according to a FEMA source speaking under promise of anonymity.

The drill, authorized by the DHS, is scheduled to take place on 3 March in Ravenna, NE, an isolated community and home to fewer than 2,000 persons. FEMA selected Ravenna because of its remoteness and because the media is unlikely to catch wind of or take interest in a government exercise in Podunk middle America.

The agency intends to send 700 fulltime employees to Ravenna, some of whom will roleplay victims of a hypothetical sickness eerily like the novel coronavirus that has infected at least 42,000 people and killed over 1,000, most in mainland China. The rest of FEMA’s workforce will portray a Gestapo-style police force tasked with detaining, interrogating, and incarcerating looters and insurrectionists that FEMA will have paid to emulate ransacking the neighborhood and to defy mandatory federal quarantine orders. FEMA, our source said, will pool volunteers from among Ravenna’s population.

The CDC, he added, is coordinating with FEMA on the exercise, and at least 15 CDC physicians will be on scene to evaluate and treat persons infected with the pretend virus. Some civilians will receive forced inoculations, but the vaccination is allegedly a placebo made of sterile water and harmless fillers-preservatives, adjuvants, and stabilizers.

“That’s a lot of brass present for a simple training exercise,” he added. “I can’t recall the heads of three agencies attending a field exercise before.”

FEMA’s triage unit will be located in Annevar Park, home to the city’s tractor pulls, demolition derbies, and other rural recreational activities. Gaynor has obtained permission from Ravenna Mayor Peg Dethlefs and Nebraska Governor Pete Ricketts to temporarily transform the park into a medical ward and staging arena from which the agency will practice combatting virulent pathogens and violent offenders.

“This all smells like a smokescreen for something bigger,” our source said. “I am not privy to all operational details, but I know when and where it will take place. And that it coincides with the explosion of the corona virus makes this all very fishy. The agency is rife with subterfuge, and Gaynor is evil incarnate and incognito. I fear for civilians who get rounded up into this exercise. For all we know, FEMA and the CDC might actually infect them with the coronavirus. We just don’t know.”

In closing, the author of this article views all FEMA exercises with a great deal of suspicion, for it has spent billions of dollars over five decades planning to wage war on the American citizenry, in hopes of depriving us of Constitutional freedoms ranging from free speech to the right to bear arms.