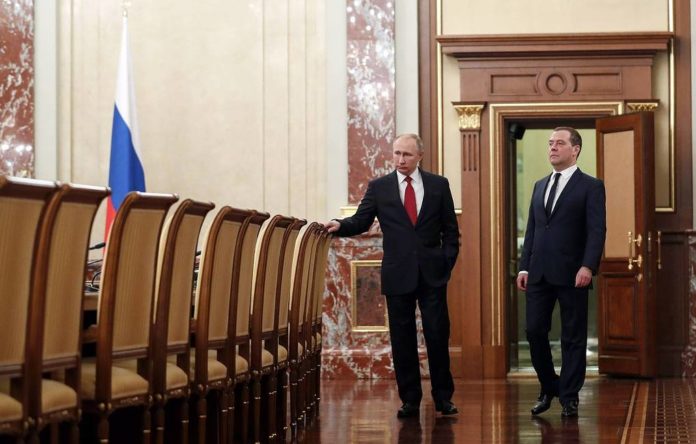 After Iran launched a cruise missile barrage at coalition airbases in Iraq and President Donald J. Trump threatened retaliation, Russian President Vladimir Putin addressed the Federal Cabinet of Ministers, warning them that premature conflict in Iran might anger Anunnaki in the region  and motivate the vile creatures to broaden their battlefield. His address took place two days after the Iranian assault.

Below is a full transcript of Putin’s remarks. It may have minor translation errors.

“On 8 January Iranian forces under orders of Ayatollah Khomeini launched a missile strike on two Iraqi airbases housing American soldiers. The attacks seem to have been calculated to restrict damage to certain targets and to avoid causing human fatalities. Our intelligence learned of the attack three hours prior.”

“I at once reached out to the Ayatollah, telling him that while I do not approve of American forces in the region, attacking them in response to the death of Gen. Solemani might provoke not only an American response but also anger a non-indigenous species, the Anunnaki in the region. I suggested he delay his attack until we learned of the creatures’ disposition in his country. But I was told ‘things were in motion’ that could not be undone; that America could absorb the damage and not respond, or America could respond militarily, and watch Haifa and Dubai be destroyed.”

“Shortly afterward, I contacted the White House and spoke with the American president. I warned him of the imminent attack. Surprisingly, he told me his nation had learned of Iran’s intent about the time we had and that he and his officials were weighing a measured response if Iran carried through. I told President Trump, who has recently been receptive to my comments and concerns of Anunnaki intrusions, that attacking Tehran or other Iranian locations would likely provoke Anunnaki in the region to attack his nation.”

“I told President Trump that Anunnaki in the region consider Iranian territory sacred ground. That enraging them might force him into a war his nation is ill-prepared to handle. I told him of our own trials against the Anunnaki and of how we incurred massive losses after engaging these disgusting monsters in Syria. I Informed him that our Special Services are equipped with technology to effectively fight Anunnaki but are not yet ready to move on their coven in Iran. I asked him, in the name of humanity, to not respond to Iran’s attack. President Trump told me he would consider my words and take up the situation with his Secretaries of Defense and State. As we now know, President Trump heeded my advice, and may have prevented unstoppable escalation of the Anunnaki conflict.”

“We have repeatedly pointed out that America’s presence in Syria and Iraq is unwanted, and there are colleagues of mine who wish war with America because of this. The real threat to our sovereignty comes from space, not overseas, and I emphasized this point to Trump. I also revealed to him what I have already said to all of you: that in coming months I intend to amend the constitution, naming the Anunnaki as the primary threat we must face, not unilaterally, but as part of a global coalition determined to save humanity from an enemy that indiscriminately destroys us.”

“I have instructed Ministry of Defense of the Russian Federation, the Ministry for Foreign Affairs, and other relevant departments to analyze the level of threat posed by the aforementioned actions of the Anunnaki to our country and take comprehensive measures to prepare asymmetrical response. All assets and finances needed to combat the Anunnaki will be made available. This is not debatable.”

“Russia will remain open to an equal and constructive dialogue with the United States of America and other nations that share our goal to eliminate the alien threat and seek to restore confidence and strengthen global security from all hostile extraterrestrials.”